In the spirit of fostering the emerging of Sunway students’ talent, Sunway Student Ambassadors (SSA) took the initiative and held the first talent competition – Sunway’s Got Talent, brought out the best of hidden talents of Sunway University and Sunway College’s students.

Held in one evening in late April, the talent night served as a platform for Sunway students to showcase their creative and artistic talents with spectacular performances. The organising committee hoped that through the talent night, they can encourage and motivate students to continue developing and honing their talents while pursuing their studies at Sunway. 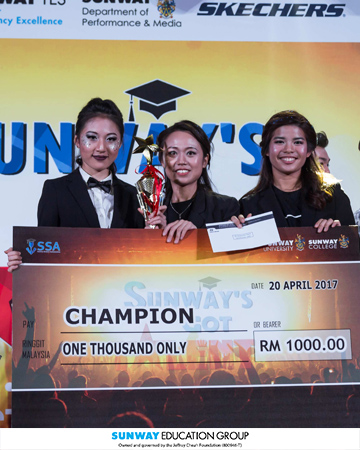 A student-run representative body, Sunway Student Ambassadors (SSA) is made up of scholarship recipients of both Sunway University and Sunway College. Its aims including promoting the ideals of academic excellence and leadership in Sunway, by providing a platform for meaningful networking and positive action. 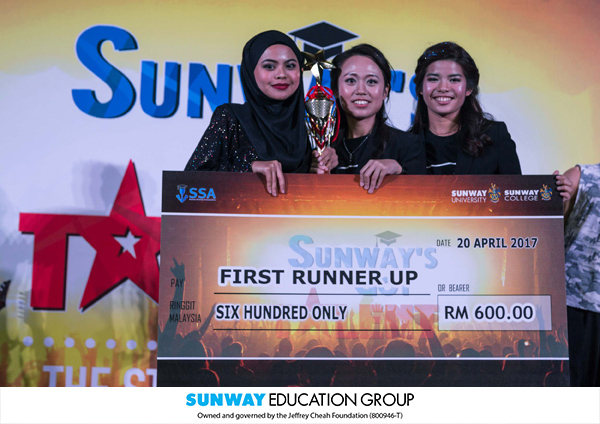 The talent night, which attracted an audience of over 900 at the Jeffrey Cheah Hall, kicked off with a performance by the Sunway University 24 Festive Drum Team, followed by the Sunway University Cheerleading team. The event attracted over 70 talented Sunway students. The organising committee held auditions 2 weeks before the finale where 20 performances were selected for an online poll session. From there, the Top 10 Finalists with the most votes were selected for the finale. The nearly three-hour talent night saw a gathering of various talents in the hall. The crowd was entertained with various performances ranging from singing, musical instruments, dancing, beatboxing, band performance to martial arts. 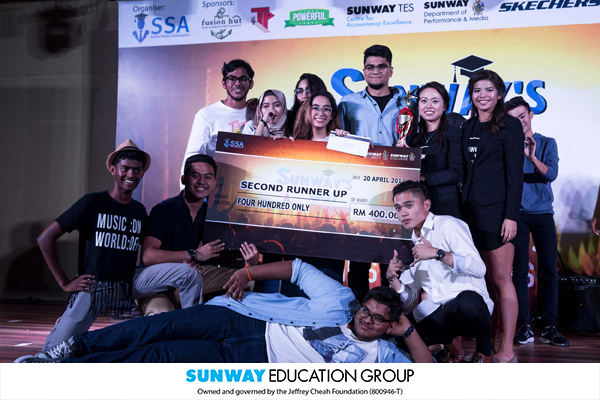 The night concluded with the announcement of the top three performers of the night where Foo Eu Fang walked away with RM1000 cash in first place. Foo performed a medley of Smooth Criminal by Michael Jackson and Storm by Vanessa Mae. Nur Shafiqa Jamaludin, who sung Hurt by Christina Aguilera came in second with RM600 cash while Thrash, a 9-man band, took the third place with RM400 cash. All three winners also each received a pair of Skechers shoes worth RM399, trophies and certificates.

Judges of the Sunway’s Got Talent were Lawrence Lim, a band leader in numerous top bands in East Malaysia and a Champion of RTM’s Band Talentime at National Level, Afsha Akhter from Fusion Hu and Sunway alumna, Frank Ong who recorded 10 albums with The Alley Cats and a music educator for 18 years, and Kid Inn, Overall Champion at the Astro Battleground 2016 and first runner up of the Asian Battelground 2016. Also present were Wong Lei Lei, Director of Marketing Department and Lee Siok Ping, Director of Student LIFE, Sunway Education Group.